The British royal family is one of the longest, still ruling monarchies in the world. They are an incredibly famous family and have a long standing history. I decided to watch a four part series simply titled, Monarchy. This is part one.

I am amazed that there is so much footage of Queen Elizabeth’s parents generation. There is a lot of footage of her as a child with her family. It’s really sweet to see her as a child and think of how much history she has witnessed in her many years of life. 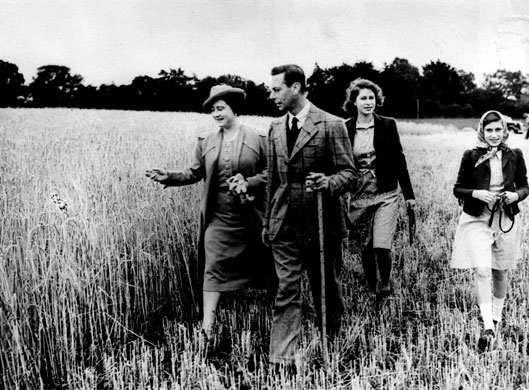 Her father, Prince Albert, who as a King was known as King George VI, had his coronation filmed for the first time and it was screened in theaters around the country.

The events leading up to WWII are documented. The British people grew to love King George and his wife Queen Elizabeth I. They boosted morale and stood by their country. They refused to leave the palace even after a bombing. The Queen started a sewing group in the palace to set an example. The family also rode bicycles to save fuel and gave up some land on their estate to farm.

At 18 Princess Elizabeth joined the services and did her part. She volunteered as an ambulance driver and learned to maintain vehicles and was a competent mechanic.

King George’s brother, Prince Edward, the one who gave up the throne for love, moved to France and never again lived in the UK. This doc also went over his role during the war and his controversial visit to Germany.

After the war Princess Elizabeth and Prince Philip of Greece got married in a grand ceremony. She was just 21 years old. It also went through her early days of marriage and motherhood. She gave birth to the next heir, Prince Charles. Prince Philip continued working as a naval officer where he was stationed in Malta.

Sadly, Elizabeth’s father, King George VI had a short reign, dying after the end of the war, thus thrusting then Princess Elizabeth into the position of Queen.

Next Wednesday, I’ll review part two of the doc called Coronation Britain – Making of a Queen.

Monarchy – The King Who Saved the Crown

Join 909 other followers
Follow Say Yes to Happy on WordPress.com